Safe + Simple:
How to do 3-point turn

By Carmel C. Tse
About the author: Carmel C. Tse is Director of Curriculum and eLearning of iPass, a CAA Approved Driving School. He holds a Higher Education Teaching Certificate from the Harvard Derek Bok Center for Teaching and Learning.

Three-point turn is one of the most misunderstood manoeuvres at road tests. And it is both tested at both the G2 and G exams.

The manoeuvre is first to test your safety awareness. The skill part is secondary, although still important. You should not perform a three-point turn at locations where other motorists cannot easily see you, i.e. before or after a curve, before or after the crest of a hill, near an intersection or at the entrance of a bridge or tunnel.

There are altogether four MSBs (mirror, signal and blind spot checks). The procedure starts with an MSB to the right. Yes, even though you are supposed to turn your steering wheel to the left at the turnaround, you must begin with a pullover to the right curb.

Stop the car fully at the right curb, then MSB to the left and steer all the way to the left. When it's safe to do so, drive across the road until the front of the vehicle reaches the curb on the opposite side of the street.

Stop the car fully without hitting the curb. Put the car into "Reverse" gear and do a 360 MSB check. Steer all the way to the right, and look directly into the rear right passenger window while backing. Use only idling speed if possible, i.e. do not use the gas pedal. Keep you eyes looking to the back until stop.

Do not back up all the way to the curb, just back up enough to complete the turn. Put the gear into "Drive" and MSB to the left. Check the rear view mirror for traffic and drive away.

- Look directly into the direction your car is travelling. Do not rely on the mirrors or rear camera screen.

- You can use gas when moving forward, but no gas while backing up unless you are backing up on a slope.

- Avoid starting a three-point turn by blocking a driveway on your right side.

- You cannot drive onto private driveways during the turnaround.

- Do not start the three-point turn if there is traffic approaching. However, if traffic appears after you start, do not stall but keep finishing the moves without impeding traffic.

Articles that may also interest you:

• 10 things to know about passing the G2 road test 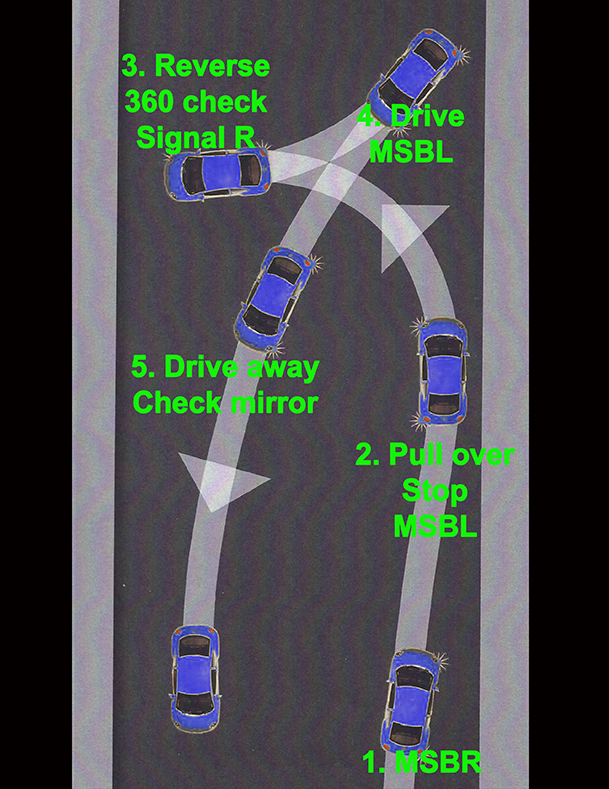